Seven new births were recorded at the Mubi transit camp of the Nigerian returnees from the Republic of Cameroun as 5,762 returnees have been transported by the National Emergency Management Agency (NEMA) to the Internally Displaced camps in Yola, Adamawa State.

A health worker at the Mubi transit camp Dauda Yakubu who confirmed the new births said seven pregnant women among the returnees were safely delivered of four girls and three boys with the mothers and babies all in stable condition.
The Director Search and Rescue of NEMA Air Commodore Charles Otegbade who leads the NEMA team and is coordinating the evacuation gave the breakdown that 4,641 of the returnees were transported at the weekend in addition to the earlier 1, 121 of out of which 650 have been further transported from the camps in Yola to Borno State.
He said the ” we have moved the returnees from the Mubi reception centre and all of them at the Nigerian/Cameroun border post in Sahuda, after clearance by the Nigerian Immigration Service and other security agencies to the Internally Displaced Persons camps in Yola.”
He also said that more returnees were still being expected at the border post while those transported to Yola have been taken to the IDPs camps in Damare NYSC camp and Malkohi and a new location in Fufore for proper supports and care by NEMA. He assured that all returnees arriving at the border would be fully supported and taken to the IDPs camps for proper care.
The Director General of NEMA Alhaji Muhammad Sani Sidi had earlier visited Mubi to officially receive the returnees and assured them of the Federal Government support. He was accompanied by the Deputy Governor of Borno State Alhaji Zanna Umar Mustapha as most of the returnees who had been displaced by insurgency before fleeing to the Republic of Cameroun are from Borno State.
As the returnees arrived the IDPs camps, NEMA officials managing those camps immediately provided them with food to eat, beddings, clothings and other basic supports. Also, at the transit camp in Mubi, NEMA provided them with foods. Health officials of the Adamawa State Government  and members of the Nigerian Red Cross Society are also supporting the IDPs at the camps.
Facebook Twitter Google+ LinkedIn Pinterest Reddit WhatsApp Share via Email Print

Inspection Tour of The New Site for 50,000 homes for ‎IDPs‬ 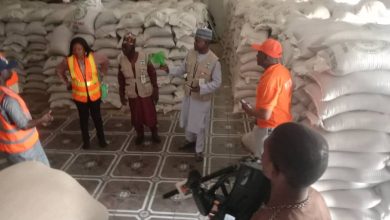 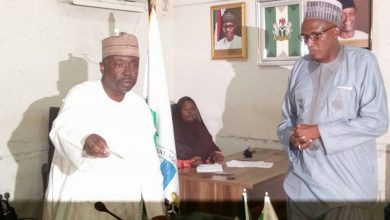