In one month, the National Emergency Management Agency will launch a software app that will enable members of the public contact the agency in the event of an emergency regardless of their geographical location.
The app will effectively be a software version of a direct 911 hotline to #NEMA. This was disclosed last weekend by the Director General, Mr. Mustapha Maihaja who highlighted the soon-to-be-launched app as just one sign of the agency’s commitment to using technology to improve its performance. In an effort to reduce its emergency response time and to safeguard the delivery of relief materials to their destinations,
The agency has outfitted trucks with tracking devices that will them to be monitored in real time right up till their point of discharge. This is in addition to their accompaniment by armed security escorts. Under the new food distribution scheme that commenced on June 8, 1,032 trucks will deliver relief supplies to target communities in the North East. According to the Director General, about 200 trucks have already delivered their payloads. Mr. Maihaja also said that the agency is establishing welfare centres nationwide to enable it carry out rapid response operations at the grassroots. He cited these developments as proof of the agency’s drive to align its operational protocols with global best practices.

Fire Incidence in the House on the Rock Church, Abuja 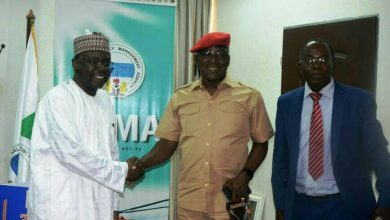