Aircraft without the latest Emergency Locator Transmitter (ELT) 406, a digital devise that sends out signal in distress situation, will not be allowed to operate in Nigeria as from 1st January 2009. Similarly no aircraft will be registered or granted certificate of airworthiness without the device installed.
The disclosure was made in Abuja at a meeting of stakeholders called by National Emergency Management Agency (NEMA) to review the search and rescue operation during the incident of the Beechcraft 1900-5N JAH Wings Aviation Aircraft which disappeared over Obudu in Cross River State in March 15, 2008 and was not recovered until after about 6 months, despite the intensive search operation.
The meeting of the stakeholders which was held today at Transcorp Hotel Abuja was to discuss the challenges encountered during the operation with a view to averting a recurrence and improving speedy reactions in case of similar occurrence in future.
The Director General of NEMA AVM Mohammed Audu-Bida (Rtd.) in his Opening Remark at the meeting admitted that the time lag during the last plane crash created a lot of uncertainties and expectedly there were a lot of pressures from the government and the public.
Audu-Bida noted that there was buck-passing amongst concerned agencies, with each organization trying to explain where its roles began and ended which further exposed the inadequacies of the country’s SAR operation and the challenges faced by agencies charged with the responsibility. While commending the efforts of some of the stakeholders, he said “we should not wait for another accident before we work out strategies to avoid recurrence.” The DG added that the meeting has not been called to apportion blames on any organization because past experiences have shown that conflicts and distrusts amongst agencies only exacerbates already serious challenges raised by disasters.
He also informed the stakeholders that the agency has compiled a list of specialized and critical equipment to boost operations and further enhance the country’s search, rescue and disaster management capabilities which is receiving the attention of the Presidency.
Some of the agencies that attended the meeting include National Airspace Management Agency (NAMA), Federal Airport Authority of Nigeria (FAAN), Accident Investigation Bureau (AIB), Federal Road Safety Commission (FRSC), Nigeria Security Civil Defence Corps (NSCDC), Nigeria Air Force (NAF), Federal Fire Service, Nigeria Civil Aviation Authority (NCAA), Nigeria Communication Commission (NCC) and private helicopter providers. The meeting would come out with analysis, recommendations and implementation strategies that would strengthen cooperation, collaboration, coordination and communication among stakeholders and agencies.
Every organization would have the opportunity to present their experiences and challenges with a view to formulating the way forward. They would also deliberate on a document on Search and Rescue and Epidemic Evacuation Plan for Nigeria to ensure that it effectively captures the intention for which it was drafted and the document.
Facebook Twitter Google+ LinkedIn Pinterest Reddit WhatsApp Share via Email Print 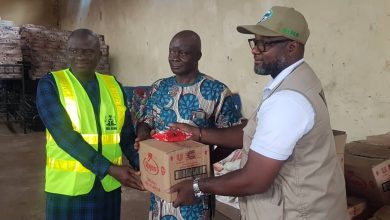 NEMA Hands over Relief Items for victims of Flood Disaster in Abia State. 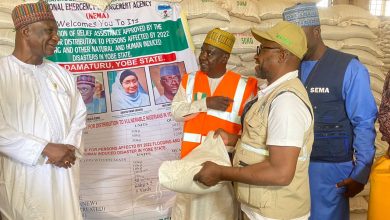