Going down memory lane with focus on  last year, the National Emergency Management Agency (NEMA) has been very active in the discharge of its responsibilities through various strategic and pragmatic activities. These include the following:

Spill over of the 2012 Flood responses continued in 2013
The spillover effects of the devastating 2012 flood that ravaged many communities which we continued in the efforts of providing assistance to the affected persons and commenced a special assessment of the situation with development various partners drawn both locally and internationally. The outcome of the Post-Disaster Needs Assessment (PDNA) is contain in the detailed report which we have submitted to the Secretary to the Government of the Federation (SGF) for information of the government and further necessary actions.
National Workshop on Dissemination of Early Warning Message
NEMA organized a National workshop on 26 -27 March 2013 which focused on the lessons learnt from the 2012 flood disaster in Nigeria, disaster management implication of the 2013 NIMET Seasonal Rainfall Prediction and flood preparedness, prevention, mitigation and response.
The workshop recorded a total of 604 participants from Parliamentarians, Federal ministries, departments and agencies, UN Agencies, state Emergency Management Agencies (SEMAs), Local and International NGOs, Red Cross, Academia, CBOs, media, Armed Forces/Para-military organisations, Dam managers/River Basin Authorities, Youth/Women groups, Faith based organisations. A communiqué with far-reaching, multi-sectoral, multi-jurisdictional observations and recommendations was issued at the end of the workshop

Flood Vulnerability Mapping
NEMA in collaboration with Office of the Surveyor-General of the Federation (OSGOF) and National Space Research and Development  Agency(NASRDA) conducted flood vulnerability mapping to identify communities at risk of flooding. The mapping was done based on the 2012 flood extent and elevation of the areas.
Presently, 17 states have been completed, placing priority on the states NIMET  and NIHSA predicted would have more rainfall. The maps have been given to responsible authorities. Mapping of the remaining vulnerable states is on-going.NEMA works closely with State Governments and relevant stakeholders to achieve its mandate for effective and efficient disaster management in Nigeria. To certify the level of preparedness of States and relevant stakeholders, NEMA has evaluated their preparedness actions in response to the recommendations made in the 2013 Early Warning Message.

The Contingency plans for 2013 floods included:
Warehouse Stockpiling/Pre-positioning of relief supplies; acquisition of equipment in readiness for flood disaster; Identification of Vulnerable Communities; Identification of Safer Grounds in all possible affected communities as temporary shelter locations and Sensitization of the populace in identified Local Governments through workshops, radio and television jingles and flyers.

NEMA through the zonal offices also embarked on community consultation and mobilization programmes which also provided for massive awareness at the grassroots in various communities.
Our media campaign strategies against the flood included considerable placement of jingles in which were aired on radio and television in both English and most local languages across most states, especially in areas predicted to experience the flood. We also enjoyed the supports of the media which were very consistent in highlighting the predicted imminent dangers.
Tripartite MoU with NOA and NESREA
This is a tripartite agreement entered into in 2013 between the National Orientation Agency (NOA), National Environmental Standards Regulations and Enforcement Agency (NESREA) and National Emergency Management Agency (NEMA) to collaborate in the development, implementation and organization of projects and programmes targeted at sensitizing Nigerian citizenry on environmental and other natural and human – induced hazards

NEMA/SEMA Consultative Meetings
In line with NEMA’s mandate to enhance vertical and horizontal coordination in disaster management, the agency has put in place modalities to achieve this goal. One of such is the regular meeting and consultation between NEMAHQ and SEMAs. This meeting is rotated annually among the six geopolitical zones. The first meeting was held at Enugu in March, 2010, followed by Ibadan in November, 2010. The third meeting was held at Yola in September, 2011 while the latest was held in Lafia in March 2013.

Training and capacity development
NEMA ensure regular training of the staff across departments, units and zonal offices in various accredited training organisations. In addition, simulation exercises which brings together the stakeholders to identify their various roles in coordinated responses to disasters. Some of the major training activities for the stakeholders included:
The simulation exercise on a terrorist attack on a Road Check Point – ‘Sawake Asara’, Armed Forces Simulation Centre, Jaji, 17th-22nd March 2013
NEMA in collaboration with UNHCR trained 20 individuals from key National Agencies and NGOs as internationally recognized trainers in Camp Management and Camp Coordination on 2-7 June 2013
Stakeholders workshop on the use of Space based information for Disaster Management. Date:(30-31)-07-13


Development of Joint Humanitarian Action Plan (JHAP) for Nigeria (2013-2015).
In 2013, the Agency in collaboration with UNOCHA commenced the development of the Joint Humanitarian Action Plan (JHAP) 2013-2015. This is a tool to be used by Government and humanitarian community to plan, implement and monitor humanitarian activities in Nigeria. The process is still on going.
Support for Disaster Risk Management in West Africa sub-region:
The Agency has sent on Secondment to the Gambia National Disaster Management Agency (NDMA), two experts in disaster management for two years starting from 2013
Lecture at Armed Forces Command and Staff College, Jaji
In 2013, the Agency delivered series of lectures on Disaster Management to students of various categories at the AFCSC, Jaji to enhance their knowledge

Lecture at National Institute for Policy and Strategic Studies, Kuru
Lecture was delivered at the Institute in 2013 which forms part of its policy development process. Also, students of the Institute were hosted by the Agency in May, 2013 as part of their study tour.
The Agency participated at the Humanitarian Affair Segment of 2013 ECOSOC in July, 2013 in Geneva. The objective of the meeting was to strengthen the coordination of Emergency Humanitarian Assistance of the United Nations. The Agency participated in two side event and a humanitarian trade fair. The DG presented a paper tittled Humanitarian Perspectives On Regional Preparedness And Capacity Development – The Nigerian Experience Through The National Emergency Management Agency (NEMA)
Hosting the Committee of the West African Emergency Management
Nigeria successfully hosted the annual meeting of the Committee of the West African Emergency Management Agencies. In confirming the efforts being by NEMA, the Director General was elected at the meeting as the chair of the Committee .
The DG NEMA who is the Chairman of the Association of Emergency Management Agency in West Africa in 2013 led five other delegates to the 68th United Nation General Assembly (68th UNGA). The major highlights of the programmme bothers on DRR activities, Human Right, Protection of Internally Displaced Persons and the review of the Millennium Development Goals. The DG made a presentation on Public Ownership And Leadership In Emergency And Disaster Management In Nigeria at a side event.

USAFRICOM Partnership
The National Emergency Management Agency (NEMA) and United States of America African Command (USAFRICOM) and other stakeholders in disaster management have developed strategic plans for management of pandemic in Nigeria. The documents were officially unveiled by officials of the United States Government and handed over the Federal Government  at a ceremony in Abuja last year. These were the National Influenza Pandemic Disaster Plan, the Military Pandemic Disaster Contingency Plan and the Military Assistance to Civil Authorities (MACA) Disaster Contingency Plan.
Acquisition of critical rescue equipment
NEMA has taken delivery of some critical rescue equipment which include heavy duty excavator for deployment during emergencies such as building collapses; Mobile Intensive  Care Unit which is a state-of-the-art-ambulances that are strategically stationed with para-medics for prompt responses; multi-purpose emergency vehicles and other equipment. The Agency has also commissioned its first ambulance bay in Abuja under a pilot scheme to strengthen the regular 24 hours standby ERT team at the head office, all zonal/operational offices and other strategic locations in Abuja and environs.
Volunteerism
The Agency  has mobilized latent hands amongst the professionals (medical doctors, engineers, surveyors, geologist and top executives in the public and organized private sector of the economy) to form Executive Emergency Management Volunteer Corps as complements to line MDA and also to support other Volunteers. 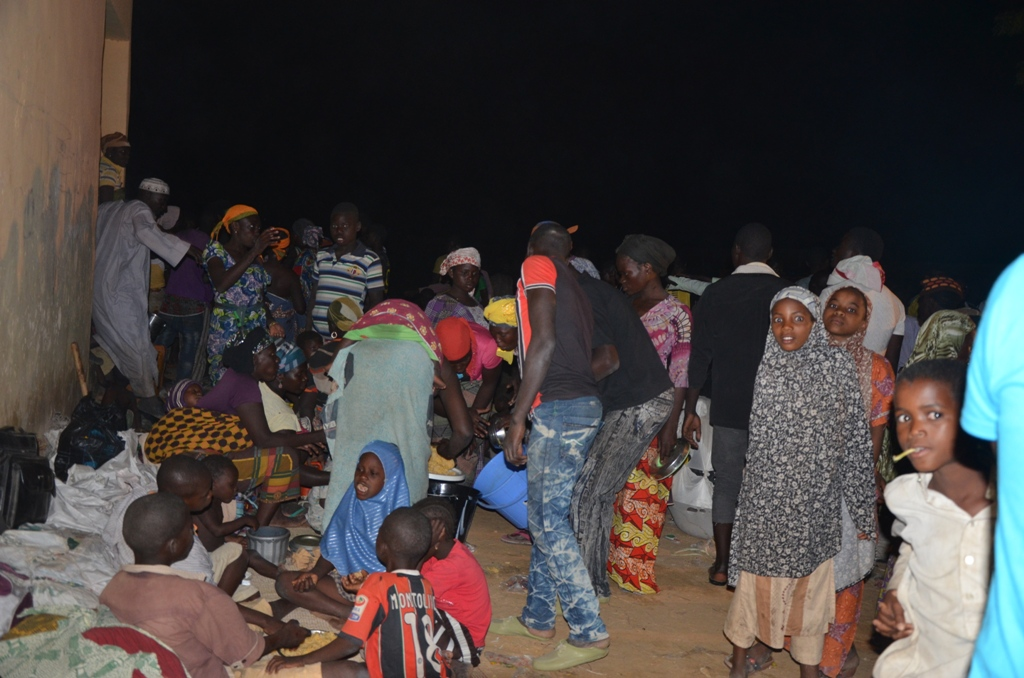