The Director General of NEMA Alhaji Mustapha Habib Ahmed, today 31st October, 2022, flagged off the distribution of grains approved by the President to vulnerable Nigerians and additional Relief Assistance for persons affected by the 2022 flood and other Natural and Human Induced Disasters in Edo State.
The flag-off of the distribution exercise took place at the NEMA Warehouse, Benin City and was witnessed by His Excellency Hon. Philip Shuiabu Deputy Governor of Edo State who represented the Executive Governor His Excellency Mr. Godwin Obaseki and the Hon. Commissioner for Special Duties Engr. Osasere Evbuomwam and Mrs. Helen Obayuwana Director Edo State Emergency Management Agency.
The NEMA team was led by Hajia Fatima Kasim Deputy Director Planning, Research & Forecasting NEMA Abuja, the Head of NEMA Edo Operations Office Mr. Dahiru Yusuf and other relevant stakeholders.
In his remarks, the DG sympathized with the victims of the recent flood that ravaged many communities across Etsako East, Etsako Central and Esan South-East LGAs of the state . He assured the Edo State of NEMA’s readiness to support in providing relief materials to victims of disaster in the state. He also thanked the State Government and other relevant stakeholders for their usual cooperation at this most difficult times and also pledge to continue to strengthen the good working relationship between NEMA, the State Government and other relevant stakeholders in order to achieve efficient and effective management of disasters in the state.
The Deputy Governor in his remarks thanked the Federal Government for its effort through the Honourable Minister of Humanitarian affairs, Disaster Management and Social Development, Hajiya Sadiya Umar Faruk and the Director General of National Emergency Management Agency (NEMA), Mustapha Habib Ahmed, in providing Humanitarian relief and also gave assurance that the relief items will be delivered to the targeted beneficiaries across the impacted LGAs affected by the flood disaster. He appeal to Mr. President to mobilize the relevant authorities to dredge the the River Niger as this will reduce the impact of perennial flooding from Kogi to Bayelsa States.

GOMBE STATE RECEIVES HUMANITARIAN RELIEF FOR VICTIMS OF FLOOD DISASTER AND GRAINS APPROVED BY THE PRESIDENT FOR VULNERABLE PEOPLE OF THE STATE. 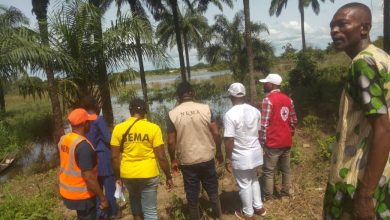