Following the recent successes by the military in the liberation of communities occupied by insurgents in Yobe State, the Federal Government, through a special committee, has undertaken damages and needs assessment of the affected areas to facilitate the early return of displaced persons back to their homes.

The Committee, led by the Minister of Science and Technology, Dr Abdul Bulama has officials of the National Emergency Management Agency (NEMA) and Yobe State Emergency Management Agency (YOSEMA). The Committee has visited the affected communities, including Gujba, Buni yadi, Bumsa, Bara, Buni Gari, Katarko, Goniri,kukuwa, Geidam, Kanam, Fika, Patiskum, Gulani. Others are Damaturu, Damagun, Tarmuwa, Yunusufari, and Ngelzarma which were either occupied and/or destroyed by the insurgents.

In a meeting with the Yobe State Deputy Governor, Alhaji Abubakar Ali, who received the assessment committee on behalf of Governor Ibrahim Geidam, the Minister of Science and Technology said the Federal Government was concerned about the plights of the displaced persons and was doing everything possible to enable them to return back to their homes soon. He said the Committee discovered through the assessment that the displaced persons and the affected communities require short, medium and long term intervention to cater for their immediate, intermediate and future needs to restore normalcy.

The Minister also told the Yobe State Governor that the support from the Federal Government was in addition to the relief intervention by the National Emergency Management Agency, which are being distributed to the IDPs pending the conclusion of the arrangement and clearance by the military for their return back home, especially in the recently liberated communities. The assessment was carried out in all the affected Local Government Areas in Yobe State

During a visit to the Acting Commander of the Nigerian Army 27 Task Force Brigade,Damaturu, Colonel Usman Yusuf, the Minister conveyed the appreciation of government and the people to troops for their gallantry in the restoration of security and liberation of the occupied communities.

On a visit to various traditional and community leaders, the Minister conveyed the assurances of the Federal Government to support the affected persons and communities. He advised them to remain calm, cooperate with the government and the military in the maintenance of security and peace.

In their separate remarks, the Yobe State Deputy Governor, Alhaji Aliyu and the traditional rulers appreciated the Federal Government for the steps taken to support the return of the IDPs to their homes.

Earlier, the Brigade Commander told the Committee that the troops had successfully cleared the two local government areas occupied by the insurgents as well as combed 15 other communities to ensure that they were safe for displaced residents to return. He urged the people to continue to cooperate with the military for the sustenance of security in the areas.[fb_pe url=”https://www.facebook.com/nemanigeria/posts/960456773986032″ bottom=”30″]

NEMA SEARCH & RESCUE WITH OTHER RESCUE WORKERS AT BOMB-BLAST SITE 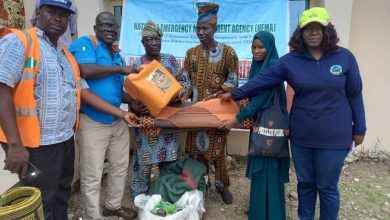