The Federal government through NEMA on Wednesday 2nd November, 2022 commenced distribution of foods  items to victims of Communal Crisis in Lamurde and Guyuk LGAs of Adamawa State.

Alhaji Mustapha Habib Ahmed, the Director General, National Emergency Management Agency (NEMA) during the flag off at Lafiya, Lamurde LGA said that the gesture was a demonstration of concern by Federal government to those impacted by the communal Crisis.

Habib, who was representated by Mr Ladan Ayuba, the Head of Operations NEMA Yola office,  said that about 650 households are targeted to benefit from the intervention from Lamurde and Guyuk LGAs of Adamawa State.

He advised the communities to live together in peace as no reasonable development can be achieved in the atmosphere of crisis.

In his remarks, Gov. Ahmadu Fintiri of Adamawa State who was represented by the chairmen of Lamurde and Guyuk LGAs, Hon Bulus Daniel and Hon Solomon Abapras thanked the Federal Government through the office of the Minister of Humanitarian affairs, Disaster Management and Social Development, Hajiya Sadiya Umar Farouk and NEMA Director-General, Alhaji Mustapha Habib Ahmed for the kind gesture and pleaded for more support for the victims.

Stakeholders that
witnessed the distribution includes; The Nigeria Red Cross, NSCDC, the DSS, the Nigeria Police, ADSEMA and community leaders.

Inspection Tour of The New Site for 50,000 homes for ‎IDPs‬ 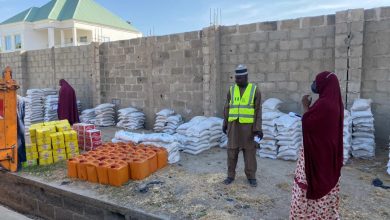 35,000 IDPs from Adamawa and Taraba taking refuge in Plateau State.