The National Emergency Management Agency (NEMA) has expressed regrets over the death of a mother and her four children in Abuja on Saturday, after torrential rainfall in Gwagwalada area council that swept away some houses.

Speaking in Gwagwalada after an on the spot assessment of the damage done by the rainfall, the director, planning. research and forecasting of NEMA, Mr. Kayode Fagbemi advised residents of flood-prone areas to immediately move out to avoid more disasters.

He said, “It is unfortunate, especially because we have lost lives. This is exactly what we have been trying to educate people on.

“There is a culvert over there, it’s likely it has been blocked, and so the water had to find its way above the road and then affected the house or houses.

“We still want to educate people, we are still going to have more rainfalls, we want the people to please clear all their drainages, waterways should be cleared of waste, and people should move, people that are close to waterways like this should move. 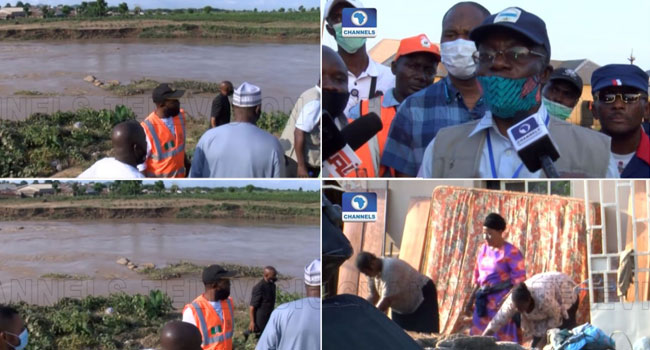 Earlier in the year, the Director-General of the National Emergency Management Agency (NEMA), Retired Air Vice-Marshal Muhammadu Muhammad cautioned Nigerians residing in areas identified as flood risk areas to evacuate their facilities immediately to avert any form of disaster that may arise as a result of flooding.

According to Air Vice-Marshal, Muhammad about 102 local governments are expected to experience a high rate of flooding, he, however, notes that the agency has put in place measures to mitigate the impact.

In a statement, Mr. Muhammad said Kaura and Zaria local government areas in Kaduna state are among the high-risk areas and urged state emergency management agencies to help sensitize residents and prepare to evacuate communities.

The NEMA DG also advised governments to organise state humanitarian coordination forum meetings in order to prepare stakeholders for mitigation and response to floods when they hit.

As part of strategy for awareness creation and response to dry season fire in Oyo State, NEMA has held a stakeholders meeting and simulation exercise to enhance collaborative efforts among them.

Flag off of the distribution of relief materials approved by the President, Muhammadu Buhari for Nigerian 🇳🇬 refugees in Dar’ salam camp, Baga Sola, Lake

As part of strategy for awareness creation and response to dry season fire in Oyo State, NEMA has held a stakeholders meeting and simulation exercise to enhance collaborative efforts among them.

As part of strategy for awareness creation and response to dry season fire in Oyo State, the National Emergency Management Agency has held a stakeholders

Send Us A Message